I returned to SD bay again on Sunday this time fishing with Chul, Tuck and Joesph.  We fished the inside towards the Coronado Bridge.  Chul and I were in the pram and Tuck and Joesph fished in a tandem kayak.  I looked at that thing and instantly thought its going to be a bitch to cast out of that thing. 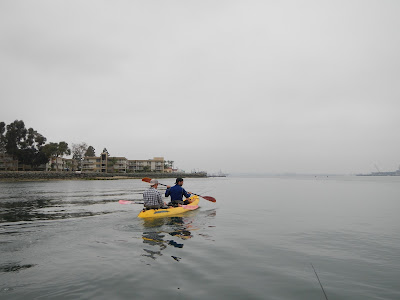 Tide predictions were good (at least on paper) and once we were actually on the water the tides were moving us quite nicely.  Chul casted out and realized that his flyline at his feet were a tangled mess.  He removed his spool off his reel and tried to fix it with his line still in the water.  In no time his fly was hit and Chul wrangled the spottie to the boat.  Only moments after I was on a spottie as well.    Not long after that fish it died down and fishing began to get tough.   The tides slowed much sooner than anticipated.  We should have started earlier. 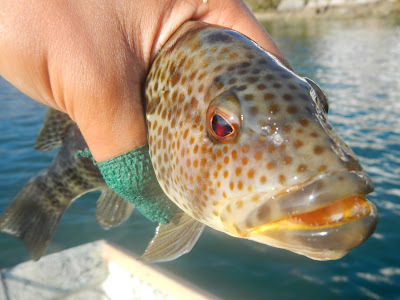 We moved along and coasted to the bridge.  Noticing the tides now barely moving I switched from my 5 weight to my 7 with a faster sinking line, know that the fishing will now be a grind and I wanted to cover more water faster than waiting for the 150 grain line to sink.  I also switched to flies from a goby pattern to my ASS Fly.  In no time I was on fish and managed a few near the bridge. Originally designed for largemouth I wanted for the longest time try this fly out in the bay and it proved its worth.

While fishing this section Chul managed a mystery fish that took him to the backing (at about 3:03 on the video).  Having not seen the fish since it broke of we can only speculate what it was.  Initially we thought perhaps a bonefish, a jack crevalle, maybe a big spotfin croaker or a white seabass.  Afterwards I called Ed to see what he thought given the way it fought, first it bulldogged than ripped line out and once it was put under pressure it bulldogged again.  Since it didn't dive during the run and just took line straight, Ed theorized it was probable a white seabass.  We'll never know.  It would have been nice to have at least seen that fish.  After Chul could calm his nerves and a quick smoke, we continued fishing and managed a few more spotted bay bass.  None of any significant size or numbers.  While it was not a stellar day for the bay it wasn't bad.  But we had to earn our fish this day.

The two loverboys on the banana boat managed a few fish a piece on their new fly rods with each adding some new species to his fish list, spotted bay and sand bass for Joseph and a lizardfish for Tuck.
Posted by gourmetsportsman at 7:44 AM