Another Place, Another Slow Day 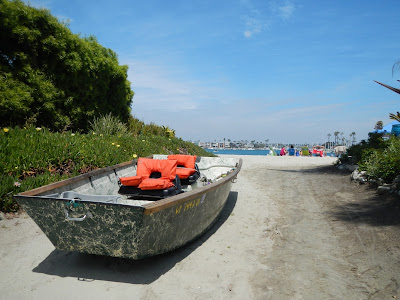 Back in the early to mid 2000s, the heyday of SoCal surf fly fishing, I must have fished Alamitos Bay hundreds of times from the shore catching every species imaginable.  I used to wake up early in the morning before work, meet up with the gang and we'd fish until it was time to go to work.  I'd shower at the gym and put my suit on there and head to the office.  Over the years the scene died with only a few stragglers left behind.  In the time I became very familiar with that area at least from the beaches.  I know a very popular spot has a huge drop off where fish would congregate.  If you were not able to throw your entire flyline in addition to the 20-30 foot leader you'd likely go home skunked.

Now that Chul has Ed's old pram I wanted to return to this water and try it from a different angle.  Instead of the usual Long Beach system (floating lines, 20-30 foot leader and a heavily weighted fly), I am able to use a normal sinking line set up from a boat.  As my usual M.O. I chose to fish my 5 weight with 150 grain shooting head.  My plan was to drift that drop-off along that beach and slay all those hard to reach fish that eluded me years ago.  Like most plans though, it went to shit.  The afternoon coastal winds push us away from the beach too fast for out lines to even get to our intended depths.  I gave up on that plan and we went looking for some areas that sheltered us from the winds.

Tides were fairly good, at least on paper, so I expected us to get on some fish.  We found an area less exposed to the elements and Chul managed his first saltwater fish on a fly.  It was a small trout sized yellowfin croaker.  The skunk was off boat and not a bad start to the afternoon.  Since croaker tend to school up I told him to work that area some more but no more were willing to take our offerings. 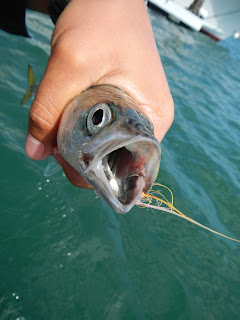 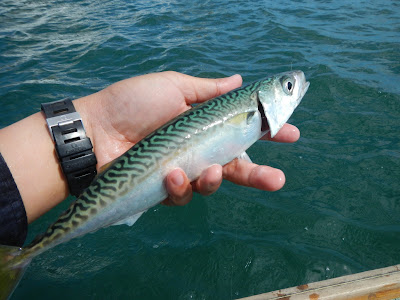 We moved to an area along the docks hoping to get on some Bay Bass action.  The winds drifted us rather quickly and the only fishing option was to cast into the wind with our backs against the direction of the drift.  We'd have to slow our strips considerably as we were stripping in the direction of the drift and tide and if you'd strip too fast the fly would be going warp speed.  Along this drift, I felt the bump and I set the hook.  The fish ran toward the boat so I raced to make sure the line was under tension.  Because of this, initially the fight weak but once the fish was under the boat I could finally feel the fish fighting.  I knew it wasn't a bass but wasn't quite sure what it was.  All I knew it had no quit.  Finally I exposed it on the surface and it was a mackerel.  These pelagic fish have no quit and are quite fun an a light rod.  I finally got it to hand.  It was not at all big but fun on light line nonetheless. 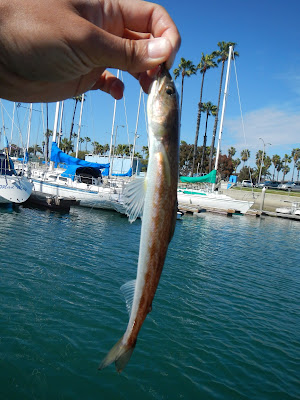 We found an area behind the yacht club that sheltered us somewhat from the wind.  We drifted in between a row of docked boats and I felt a bump.  I set the hook, felt it get heavier and starting stripping line.  While the rod went heavy there was little to no fight.  With little effort I managed to get the fish to the boat.  I have no clue what it was.  Perhaps some sort of goby but I was not sure.  It had teeth and flared its gills like that dinosaur in Jurassic Park that spit in that fat ass's face.  *Edit* Fish is a Lizardfish.

We fished hard for three hours or so with little to show for it.  I think Chul only had one fish even take an interest in his fly, I missed at least two that I can remember.  At least both Chul and I added some species to our list that we never caught before.  So that was a plus even though I'm not sure what the hell I caught.  Hopefully Chul and I can get back to the "Pudd" tomorrow so I can enact some revenge on those bass that eluded me the last time.  Hopefully this hernia I got from dragging that damn pram to the water goes away too.

Posted by gourmetsportsman at 9:17 PM