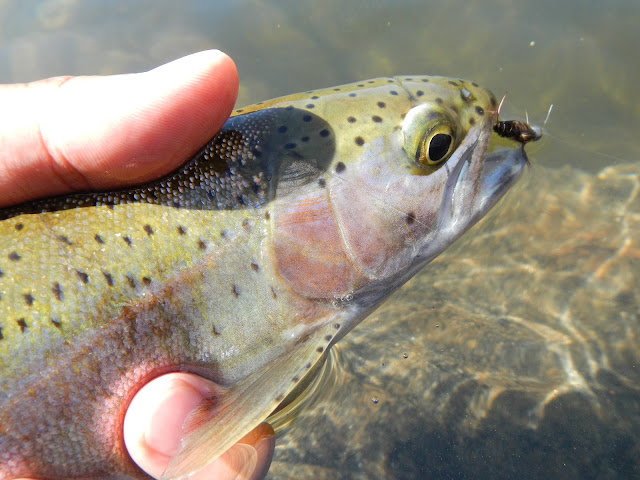 Day three we had a choice to make.  Stay or move on to other waters.  With this technical water and Erica skunked we decided to move to easier water so that we could get on more fish.  But before we moved we decided to fish a promising section upstream with Erica staying at camp nursing a sinus attack. 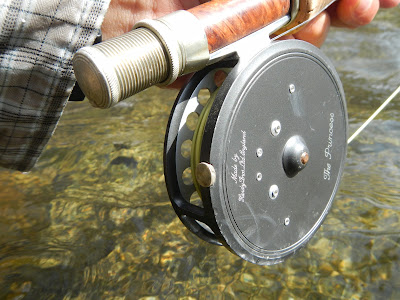 With the leader of my T&T Helix rod  out of commission, I decided to use my Sage XP 5 weight that was rigged for dry fly fishing.  I cut off the skwala fly off and began setting it up for nymphing.  Ever since my father gave me his Hardy Princess reel, its been sitting in my drawer for years not even loaded with flyline.  So I made it a point to fish it and loaded it with Rio Gold line before this trip.  I used up my 5X fluoro the day before and Chul gave me enough to add it as my dropper. 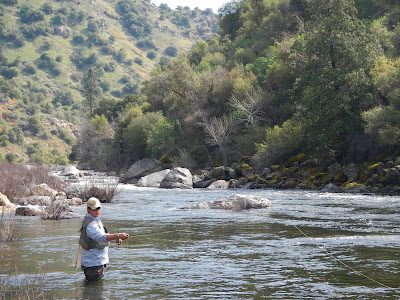 Chul made it first to the water and began high sticking a seam.  I fished below him 20 yards.  This section was faster and deeper than it appeared.  Chul moved upstream to a confluence and fished the funnel without any luck.  I followed and as I met him at the confluence and since the other side of the river looked promising and he asked me if I wanted to cross.  Since falling twice yesterday I chose to stay on our side and fish the shallower water. 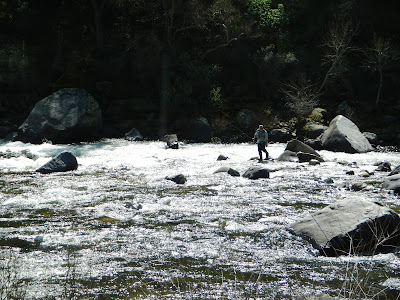 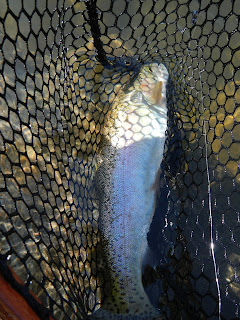 As Chul made his way to the more powerful water, I fished the left side.  On my first cast I snagged a the submerged rocks and broke off my leader at the split shot.  Pissed and without any 5X tippet I just added another nymph to my existing leader.   I moved back to the road and made my way down to the truck.  Watching Chul fish, I moved back to the water and fished the funnel he fished earlier.  Within a few casts I hooked up on a very solid fish.  When I landed her, she refused to be handled and squirmed the whole time.  Releasing her I made a few more mends in this section missing at least two more bumps.   At around noon we gave up and Chul looked for way to cross back.  When he reached me he let me know he missed a monster that broke off. 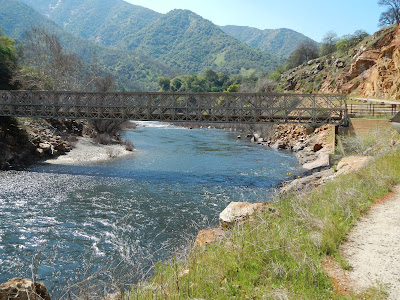 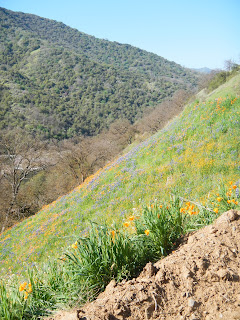 Arriving back to camp, Erica was feeling better and we started break down camp.  The plan was to start our way down south and fish a river we are familiar with and have had success.  On our way out we were able to finally see this area in the daylight and all its springtime beauty.  We missed all this as we made our way up the mountain in the dark on Thursday.   On our way out we saw a coyote cross the road only to turn back and give us the "what the hell you looking at" look. 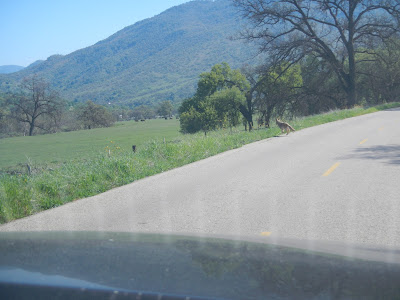 It seemed like forever to get off that mountain and even longer to reach the freeway.  After sometime on the road we decided to stop in one of the closest town for lunch. Exhausted we were in no mood for any crowded or loud places to eat.  Our first stop was exactly that and even though we were next in line, and after the front counters incompetence we decided to find another place to eat.   We found another that was calm and quiet.  After eating we felt better and made it back to the road.

Upon reaching our destination, we were debating whether to camp or just get a motel room.  We opted to camp but after driving around looking for a campground, we choose a room instead.   Needing a shower, it was a good choice.  I was in no mood to cook so we looked for a restaurant and ate out.  Afterwards we hit the sack and I slept like baby despite Chul's snoring.

Posted by gourmetsportsman at 3:35 PM