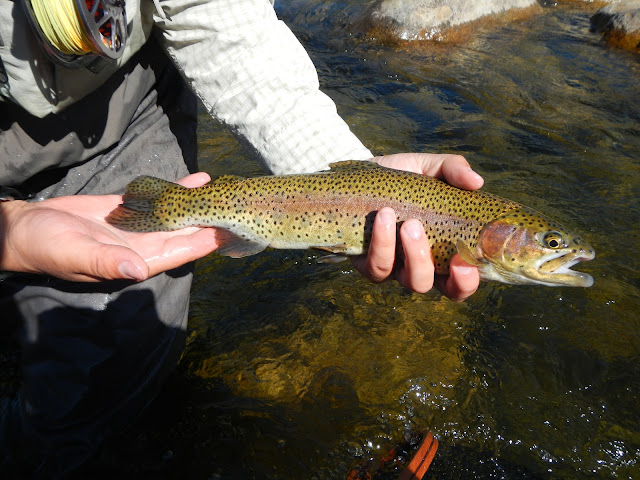 Ed's on furlough and Chul was one of the few who had President's Day off so we decided to fish.  We returned to the Kern to see if we could do better than what we did last weekend.  This was Ed's first time on this piece of water and we wanted to get him on his first KRR.   We started near an area we wanted to fish last time but was already taken by a few fly fishermen.  At the moment we entered the water Ed fished a seam on the other side of the river and on his second cast managed a to hook up on a 12-13 incher but after a short run popped off.  Chul and I fished upstream, where we saw several huge fish some trout, some suckers, and some pike minnow.  Refusing all our offerings, Chul eventually moved upstream and in time Ed followed.  Unwilling to accept defeat I stayed sight casting to these massive fish.  It was until I snagged a bush and snapped my leader did I concede defeat and moved to the pocket water that Chul and Ed were fishing after replacing my flies and tippet. 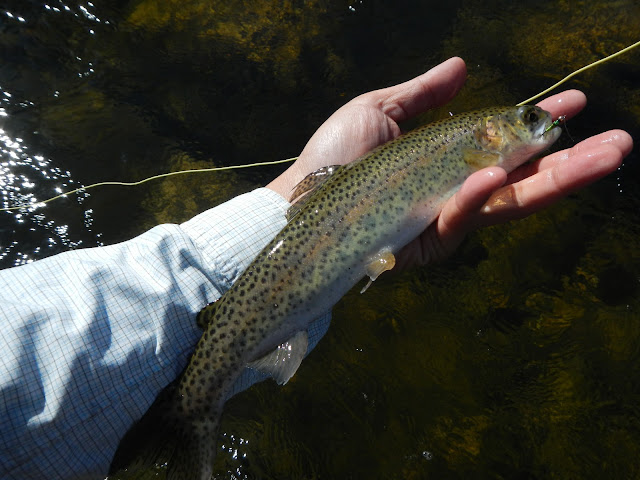 I fished a deep seam next to a boulder just below the hole Chul was fishing.  My thingamabobber sank and I set the hook.  The fish pulled hard and I managed to bring him to hand.  The fish was about 14 inches but skinnier than most of the fish I've seen in this river.  Meanwhile Chul hooked up on a unrelenting fish that refused to be landed.  I moved up in the fast currents to help him land it.  This proved difficult and but in time I managed to get it in my net.  His fish was the fish I wish I landed, 16 inches and fat and healthy with good color.  Chul would manage a few out of that hole including a double that broke off when each fish ran in opposite directions. 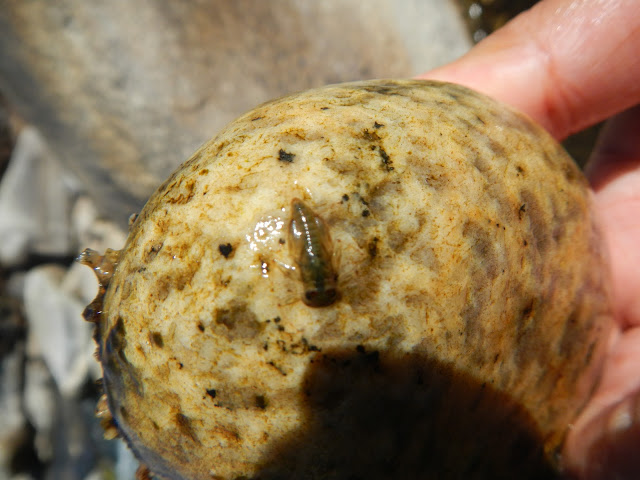 With the BWO starting to hatch we decided to return to the truck and rearm with our dry fly rigs.  Arriving at the hole with the lunkers, trout were beginning to rise and with two fly fishermen making their way in the area.  I chose to stay at the hole to stake our claim and told Ed and Chul to get to the truck and get their dry fly rods.  As I waited for them trout continued to exploded on the surface.  As I drifted my flies through the hole trout continued to aggressively rise.  On one drift my bobber sank and I set the hook.  Bent to the cork, my rod went heavy and then began to dance.   I believe given the fight and how heavy the fish was it must have been one of those pike minnows.  As I began stripping line my tippet broke at the split shot.  I now suspect that the fish clipped the line against a submerged jagged rock along the wall.  As time pases I wondered why the hell those two were taking so long.  I looked down river and saw Ed fishing the same hole he did in the morning.   As fish continued to rise I stood there scratching my head.  What the hell is he doing nymphing when we have fish coming up!?  Chul finally got Ed's keys and made his way to the truck to rig up his rod.  I went downstream and asked what the hell is going on.  Chul and I made our way to the hole and with the hatch dying down Chul managed one fish on the dry before it died.  Afterwards we left and made our way up the road for new water. 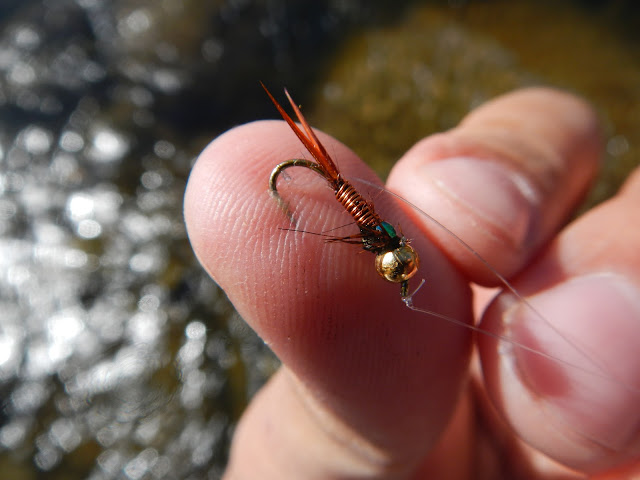 We fished an area of pocket water that we managed some fish last outing.  This is the area I caught a couple dinks and lost a very good fish the last outing.  We fished for a while with no luck.  As I made a backcast I snagged on a branch of a tree above my head.  As I pulled the tipped free, the line slingshot back at me and the fly buried into my thumb.  As I tried to free the fly I realized this fly was not barbless.  Fortunately I brought my pocket knife as I normally do not,  I dug into my waders to find my benchmade knife in my pocket.  I began the surgical cuts to free the barb.  We left after that and headed to our "honey" hole. 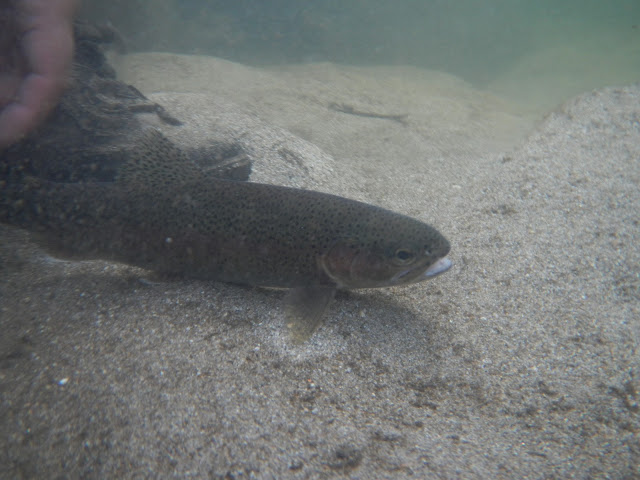 Ed, without a fish, was given the first run at the honey hole.  Although he managed a take or two, he couldn't get a hook up.  Unlike last week this hole was hardly spectacular.  I did have a huge fish take but broke off on some submerged boulders.  Chul took a 12 incher on a dry fly.  Ed had his last chance on a fish but broke off.  This ended our day trip and made our brutal way back home.

Posted by gourmetsportsman at 9:07 AM