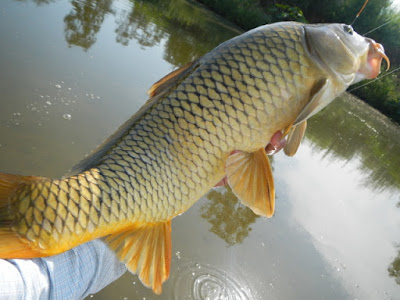 With the last couple weeks rather busy, I needed some respite.  My intention was to head out to the clay range again for some more pre-season practice but with the temperature in the valleys in the triple digits, I choose to stay closer to the cooler weather.  Its been some time now since the last time I fished in these local waters.  The last time the water was high and waders were necessary.  Looks like not much has changed from then.  Water is still high and murky.  The vegetation along the banks are 3 feet over head and just getting to the water is a chore.  Waders are not only necessary so that you can get in the water and make a decent cast but also as armor while you ford through all that brush. 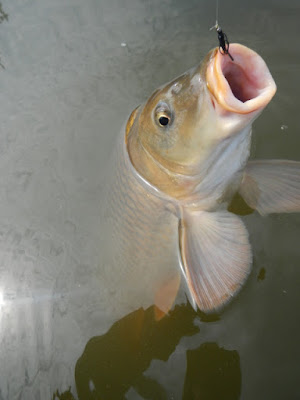 The instant I made it in the water I noticed three or four carp within casting distance.   I blew each opportunity until I lost them in the darker deeper water.  So I left and waded downstream.  It was not long before I came across a feeder.  I casted right over him and I feared I spooked him but no, it stood its ground even after I felt that I foul hooked him, most likely somewhere near the tail.  Normally that's game over but this fish simply moved three feet to my left ad resumed feeding.  So I casted to him again and he was on.  He fought hard with a few sprints but no long runs.  Forgetting my boga I did not have a chance to weight him.  I figure above 6lbs maybe closer to seven.

With that area now disturbed I moved further downstream.  The wind was now beginning to pick up and I casted along bass twin tule and tried my luck for some bass.  Although the wind was blowing this section of tules, they were moving more violently than the wind conditions were dictating.  I knew there was a fish feeding within those weeds.  I casted into it and instantly I was hooked up.  This fish bull dogged me the whole time and I figured it may have been a nice bass.  eventually the fish came up high enough to notice that it was another carp.  This fish, like the last, only made few attempts at a sprint but no long runs.  When I finally got it to hand it was about a 4 pounder.  After that I had my fix and headed out of there.  Not a bad day for about a hours worth of work.
Posted by gourmetsportsman at 1:34 PM