Getting ready for the Season, Prado Dog Training 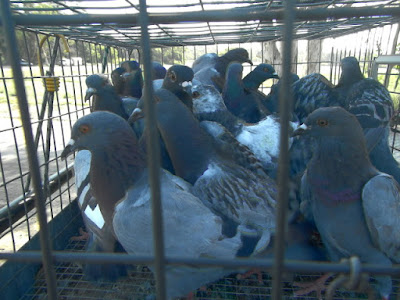 With one day away, September 1st marks the dove opener for most of the States.  Most hunters are foaming at the mouth by now.  Not me.  I'll bypass the opener like I have done so for a few years now.  It's simply too hot and there are too many knuckleheads that ruin your day.  On top of that, who knows what yesterday's dessert rains had done to those birds.  They are probably all gone.  I do look forward to September 8th, though as it marks the opening of the early mountain quail season for the northern half of the state.  In anticipation to that I joined Lou for his weekly dog training at Prado.
Lou had excess birds and as this was his last time out for training until the season opens he gave me call to see if Kaiser needed some bird work.  He invited me last week as well but unfortunately I was too busy t come out.  With two of his females in heat, Lou brought his three other dogs.  We had 20 birds for four dogs, so each dog was going to get a good workout.  I brought my Merkel 147SL in 12 gauge and Lou brought his Darne R10 in 20.  After telling Lou about Darnes and having bought his first, he is now a convert.  His Darne is lovely but unfortunately its LOP is much to short.  Lou added a slip on pad, which I hate and can not stand, to help increase the LOP to 14.5 inches.  I told him to get rid of that slip on and put on a proper rubber pad but its his gun.
It looks like my time at the clay range was a big help as no birds escaped my 12 gauge.  If only that will be the case in the field this year.  I even tried the R10 for the last bird.  His Darne seems so much whippier than mine.  As with any lightweight and short gun it is very whippy and as such you tend to stop your swing.  I missed the first shot and just barely made the second after realizing I was stopping my swing.  Kaiser needs work.  He bumped the first bird tripping the launcher right after he pointed.  After a correction he stopped that nonsense.  Since I've done little bird work in the past off seasons, he is no longer is he steady at wing and shot which is a shame.  Lou's dogs did well as they should have as they've been training all damn summer.  For whatever reason all the birds seemed to launch my way.   Also my damn launcher failed to trip the latch, I'm hoping its just the batteries.  If not I'll be pissed.

I videoed the training with my Contour Roam and if I have the time and patience to upload it on youtube I'll post it here.  They came out quite nicely.
Posted by gourmetsportsman at 3:05 PM