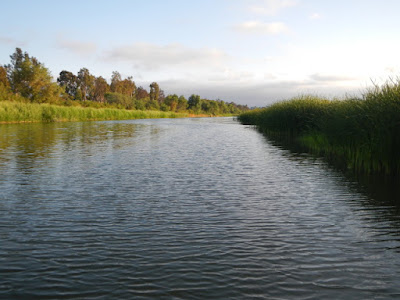 Before the night's festivities, I decided to try my luck at carping at sunset.  It's been sometime since I've fished these waters.  The last time the vegetation was about waist high.  Now its clearly overhead.  That is not surprising, what is though is the fact that there is some much water.  So much that the water is up to the tulies.  If that is not bad enough visibility is next to nothing.  You can't see past a couple inches. 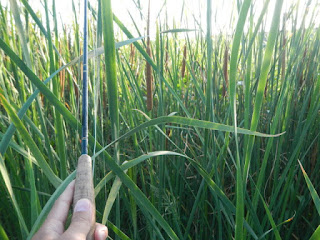 Despite the poor conditions I carried on.  I figured if I couldn't find a carp I'd switch to bassin'.  After all I had some new top water flies to try out.  Armed with my Sage XP 5wt with a black rubber legged hare's ear, made my way through the jungle.  It appears as though not many people are fishing here, as the trails that were there last year are now longer.  There are only a few entry points and getting in the water is problematic with only wellies.   In time I found an entry point and waded carefully in.  After about 30 minutes of blind casting I hooked up what felt like the many plastic bags buried in the sand.  I pointed the rod in its direction and began pulling.  First there was the heavy resistance, then it seemed to come loose, then heavy again.  It was an awkward feeling.  Then I saw a wake.  I was actually on a fish.  Once I realized that I pulled the rod up to fight it, then it came loose. 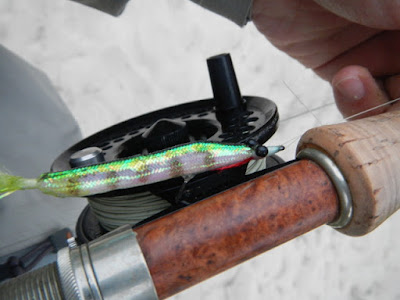 Koji sent me some foam that he uses for the floating minnow fly and I've been tying some with it.  I was eager to try it out.  So I tied one on.  The sun was beginning to set so it was perfect timing.  No luck and as the sun was coming down I went to the shallows to see if I could get either a carp or bass.  Once I got there I saw carp so I took the popper off and tied an aggravator.  The sun was down by now and I could see carp spooking with my casts but they were not going far.  They would return shortly after.  I'm not sure if they are breeding again as they breed several times a year.  After about 20 minutes I gave up and headed home to see the fireworks show. 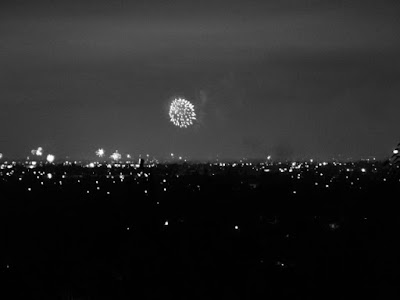