Who Do You Think I Am Michael Phelps?

The original plan was to backpack deep into the canyon and camp for the night but that plan was scraped so we were just to fish on Saturday.  Chul's girlfriend was to join us.  The new plan was to hike deeper than we did the last time and fish all day.

We made it to the trail head and hiked the trail beyond where we dropped in the last time.  Finding a safe entry point was proving difficult and finding some fly fishermen already on the water moving downstream was discouraging.  After  looking at a few sketchy areas we finally found an entry point and after made our way down carefully navigating over a rocky area.  Our entry point lead us into an area that required that we swim through a deep large pool to make it back.  So before we decided to get wet we ate our lunch not only to lighten our loads but also to make sure our food doesn't get waterlogged if we couldn't get it out of the water.  After lunch we fished a few downstream holes before we started our swim upstream. 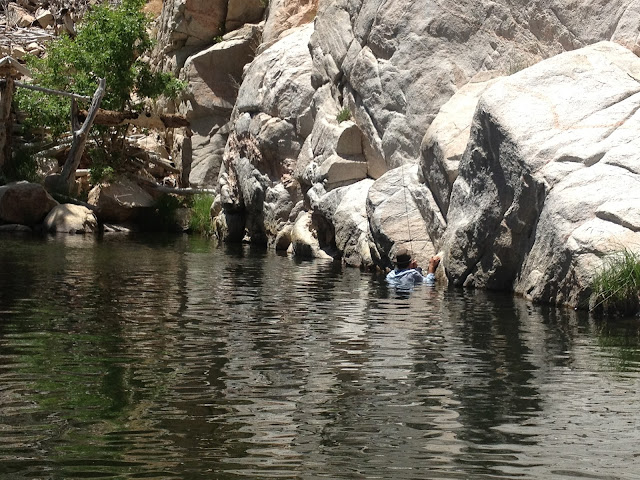 I was the one to lead the way.  Honestly I didn't think it was going to be that hard but then again I never had to swim fully clothed and with wading boots and with one hand while carrying my waist pack and rod above the water.  I must have made it about 15 yards before I realized this was going to be a bitch.   Its a good thing we wet waded, had we wore waders we would have drowned for sure.  I swam to the nearest rock face and found a hand hold.  I rested here to catch my breath as I just dove in and the cold water took my breath away momentarily.  After a brief rest I swam to the next rock hold I could find.  This time though my hat and glasses came off and I grabbed them with my free hand I panicked a bit as I sank and took in a big gulp of water.  I managed to find an area in the rock face that I could place my rod and waist pack so I could put away my glasses in my shirt pocket.  Holding my self up here for awhile to try and regain my composure, I decided screw the contents of the waist pack and get it wet and swim with both hands.

I made it to the edge where I could stand, I turned around to find Chul and Erika not there.  Did they find an easier way around?  If they did I would have been pissed.  After a brief moment they reappeared and made their swim.  Chul wore his vest today and was able to place both rods in his rod holder in his vest.  They were able to swim with both hands so they made it much easier than I.    Both made it across and we stood in the sun to warm up wring out water from our shirts.  I'm glad we did not backpack this weekend.  It would have been impossible to pass this area with a backpack.  A few more places in this area required some more deep wading and alot of boulder climbing.  It was more exploration than fishing.
We did manage some nice fish but none the beasts we were looking for, many respectable fish in the 8 inch range or so.  I managed to hook a large fish, it looked like a 12 inch fish in the water so it must have been at least 14 inches, while on top of a boulder.  While trying to find a way down safely the fish came undone.  Past this area we ran into the group of fishermen we saw above from the trail.  I chatted with them for a while and watched one of them catch a solid 12 incher using his nymph.  hey told me they knew very well the swimming hole we just went through.  Two of them had exactly the same experience as I.After chatting we moved upstream they moved down.   We caught several throughout the day.  Chul managed a solid 12 incher or so in a section of water I would have never fished.  It was slow almost stillwater section of a long pool.  He later told me he caught another about the same size after I left him there.   I fished several pocket water catching fish ranging from dinks to 10 inches.  I did finally see two Federally protected Arroyo Toad that have given our fishermen such a headache.   We managed to finally reach our drop in point from last time.  Chul and I fished the tight section where we saw a flash of a very nice trout  in our past outing.  After a few drifts I had a hard take on my stimulator.  We landed it and it was a solid 11-12 incher.  While a nice fish, we concluded it was not likely the fish we saw the last time.  The flash of the belly seemed much taller and fatter.

This trip was brutal. Alot of swimming. Alot of bouldering. Alot of tough work. The fishing was not as good as the last time. Mostly because we were working so hard just to get to some fishable water. Nevertheless I think we all had a good time and we managed a few decent fish. I told Chul the next time we trout fish lets choose an easier (in terms of hiking) place. I think he agreed.  We had dinner at a nearby Italian restaurant and the calamari and pizza definitely hit the spot.  I was so hungry I probably could have ate a rhino's asshole and it would have tasted good.  Throughout our hike Erica and Chul did show me some more wild edible plants which was nice so if I ever get stuck in the woods at least I will know a few more edibles to keep me alive until help arrives.  I'm not sure how many calories I must have burned throughout the day but I'm sure it was a lot.  ﻿﻿﻿﻿

Posted by gourmetsportsman at 11:30 PM