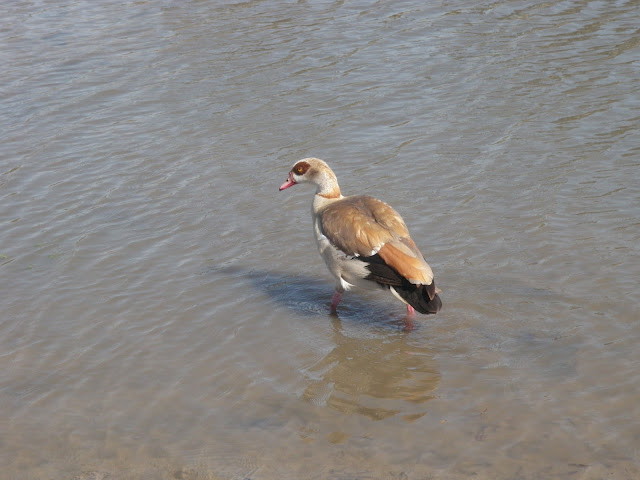 Witha half an inch to and inch of rain forecasted for the weekend and still amped on the 9.5lb carp I caught the last outing, I decided to head out in search of another great carp. With conditions near perfect, no breeze and some sunlight, I was quite disappointed when I reached the water. The water has nearly doubled in two days! WHAT THE HELL? Where did all this water come from?

Today's fishing was now going to be tough. All the beaches were now submerged and casting was all done in or around the tules. It was not fun. I managed to spot only a few in the shallows. Most were just cruising so they weren't taking even the most perfectly presented flies. I did see a pod of actively feeding carp near the shoreline. I positioned myself in the water, trying carefully to be as silent as possible. I made several casts to them, managing to hook up on some vegetation. After freeing my fly I casted again and had one take. It did not run but bulldogged me a bit until it spit the hook. After that it was pretty much downhill. I managed to find a carp here or there but none could bite. I tried the Prince Aggravator size 10 and later moved on to the Ice-E Hot Fly in peacock but to no avail.
What a bust and with the rains coming, this is likely the only time I'll be able to fish for sometime until the waters clear and recede to normal levels.
Posted by gourmetsportsman at 2:17 PM