Waking up this morning was rough.  After yesterday's fall my left ass cheek felt like I spent the night in jail.  actually my whole body ached as if I survived a gang fight.  To add to that I woke with a sore throat.  Great I must be getting sick.  I couldn't worry about that now, I had to meet Alex on the water by 9.  I downed some chloraseptic and heading out the door.

I arrived at the parking lot and Alex was already waiting for me.  After greeting on another we began rigging up and headed to the water.  Up on the high vantage point we saw many cruising along the bank.  Alex wanted to show him how I catch these things so I moved down.  Alex remained above and spotted for me.  After a few cast I knew that there were a handful along that bank and told him just to come down and fish alongside me.  I continued to bang the fly in between some tules and in no time I was hooked up.  At first I though I hooked up on some submerged vegetation until my line began to move and the rod began to shake.  Fish on.  I managed to reel him in pretty easily.  It bogaed at 4 pounds.  The fish seemed to remain, at least for a bit, after the catch.  But within a few minutes they disappeared.

Alex was now screwed, the fish had scattered.  We moved in search of them.  I reeled in and began spotting for Alex.  I was determined to get at least one of my friend on these fish. It was not to happen though.  I am the WORST FUCKING GUIDE EVER.  Note to all my fishing buddies DO NOT fish carp with me, it will guarantee a skunk for you.   We tried everything at one point the wind began picking up and we could not see any fish.  We moved to the other side of the river and began seeing them again along the bank.  Alex tried to get one to bite but none were willing.  They were everywhere.  I had never stayed out there so long.  I was determined to get one of my buddies on a fish there.  Yeah right.  When you're the worst guide ever, stuff like that doesn't happen. We fished til about 2 before giving up and heading to lunch.  I told Alex to come out tomorrow morning and fish by himself, he'd probably catch 30. 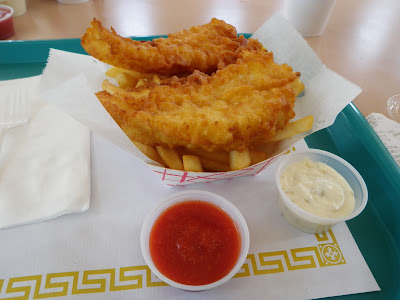 Posted by gourmetsportsman at 5:03 PM