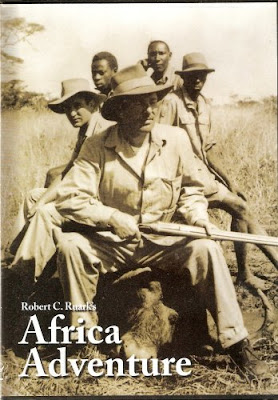 Tonight I decided to pop in one of my DVDs I haven't seen in quite a bit.

If you ever dreamed about what it was like back in the golden age of Africa, Safari Press has the right DVD for you. Filmed in 1954 Robert Ruark's Africa Adventure follows author Robert Ruark on his expedition through African in search of the Big 5. Legendary professional hunter, Harry Selby leads the hunt and guides Ruark to some very impressive species including a cape buffalo with a 49 inch spread and an elephant with 100lbs tusks.

This film begins with a disclaimer that the film is old and some footage may not up to modern standards. To me this is part of it's charm. I love this film, it reminds me of my grade school years watching films on actual film shown to us through actual film projectors. Modern kids have no ideal what I'm talking about. Watching this film reminds me of those days in class watching Jacques Cousteau or something like that. I actually wished that Safari Press would have added an optional soundtrack of the film projector noise into the dvd. It would have felt more authentic. The footage is not even cleaned up, there are parts where the slides mess up and jump just as it would it it were shown on actual film.

With exception of lion, Ruark takes all the big five on this video including a charge from a black rhino. There is also some scenes of wingshooting as Selby and Ruark's wife shoot up some guinea fowl and sand grouse for dinner. The hunting is great and edited quite nicely. Robert narrates the whole movie and does a superb job entertaining you. Again this adds the whole grade school film aspect of it that I find so endearing. If you are expecting a shoot them up movie this is not for you. The film is much more a movie encompassing the whole African experience including the hellish stops one needed to make to just get to Dark Continent. Its hard to believe how many countries Ruark rattles off before even touching the African Continent. Talk about rough. Thank god for 747s. I did find it amusing that the film shows people actually disembarking the plane in Africa with rifle in hand! Times certainly have changed.

Unlike this trailer from TCM the DVD is in black and white. I apologize if you have to put up with the stupid advertisement at the begining of that trailer. If you are like me and can't stand to watch it, try and refresh your page with F5 and replay the clip. That usually brings you directly to the trailer.
Posted by gourmetsportsman at 10:05 PM