Called Up From the Bench, Ghetto Steelhead, Missed hits, Monster Bluegill and Ass Rapings
﻿ With rain forecasted this weekend, Chul and I hit Mission Viejo Lake one more time.  After the last visit and armed with a little more knowledge, I was amped up to head out there.  Our original intention was to fish it yesterday but since it was a trout plant day, the lake was closed to fishing.

So we came today.  I am still convinced I can get one of those lunker bass that live here.  With that thought in mind I called up from the bench some old rods that have been collecting dust in the corner.  I brought my Sage RPLXI 9wt that has been fished so rarely that the cork handle is still clean.  I also brought, since breaking my favorite T&T 5wt, my Sage XP 5wt that I built years ago.  My game plan was to fish the big rod with my big articulated trout fly until I either caught a fish or became tired of casting the big rod.

Chul was the first to hook up with a basszilla fly on his Sage 6wt.  To his surprise, it turned out to be a stocker trout.  It hit his fly hard and gave him many head shakes.  These are Nebraska Tailwaters and Chul affectionately refers to them as ghetto steelhead.  I was surprised how well it fought and how nicely formed the fins were.  Coloration was nice too.  These are not your typical DFG stockers that lie down and die when you hook them.  The fish was probably 18 inches or more and was rather fat and healthy.  It was a nice fish for a stocker. 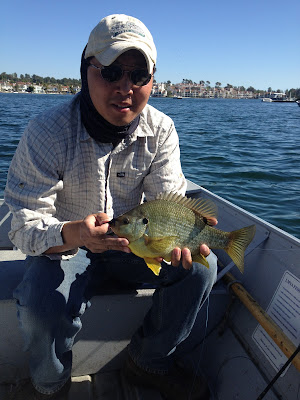 I fished my big rod for two hours or so and managed to get bumped but I was too late to set the hook.  I think there was just too much line in the water and I couldn't get enough pressure on the fish.  Eventually I grew weary of the 9wt and moved on to my 5wt.  After casting the big rod the 5 felt like a feather.  I could cast that rod all day without tiring.

We made into one cove where we were being thrown around like a rag doll by the wind.   With a purple wooly bugger I threw toward the middle of the cove and managed to get a fish.  I retrieved him toward the boat and noticed it to be a juvenile bass.  It popped off just before I tried to lip it.   I continued to cast in the middle of the cove and my line just stopped.  Initially I thought I sagged some submerged structure but then the line began moving.  The fish ran from the front of the boat and circled to the back going clockwise from the 12 o'clock position to the 8 o'clock position.  I was shocked to see it was a huge bluegill.  Due to its size, Chul initially thought it was a crappie when it was in the water.  I could not see it from my position but when I finally landed it, I was shocked.  This is the biggest bluegill I've ever seen live.  I put him on the boga and he measured at 2 pounds.

While fishing this cove a fisherman on the docks was telling us abut how he caught his trout and strung it up on his canoe, Big George, a 20 pound bass and his almost as large partner (the ones Chul and I saw last time) came up and hit his strung up trout.  I told him that is where Big George lives, we saw him last time.  His trout was at least 2 pounds.  Maybe I need to start casting even larger flies.  Maybe I should rig up some of those Marlin tube flies in a rainbow trout pattern.  We continued to fish here, though the wind was pushing the boat around.  I casted out and noticed my fly line was knotted up.  As I was fixing it my fly was hit hard.  Real hard.  I missed him as my hands were occupied and had no time to react.

Eventually we left this cove to head off to the other side of the lake.  There Chul managed a juvenile bass similar to the one I lost at the boat.  Here we were somewhat protected from the wind and casting and trolling the boat was much more manageable.  The fishing seemed to die after we left this cove.  We left at 5pm and called it a day.  It was not bad for a few hours of fishing.

Posted by gourmetsportsman at 10:39 PM