Last Chance Till Next Season

Since it is the last weekend for the bird season, Ed and I decided to make one last trip out afield. We hunted a canyon I thought might give us the best chance of avoiding others that had the same idea. I was was wrong. Given the steepness of the terrain I figured most would have avoided this area but we saw three additional hunters and there could have been more. 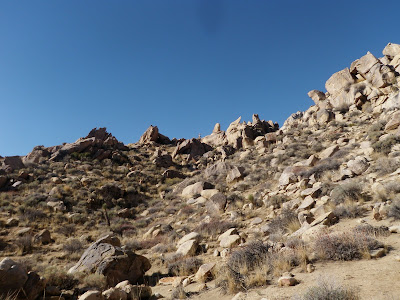 We began making our way up the steep terrain looking for sign and listening for calls. I hoped for some chuckar today and loaded B&P Classic 20 gauge #5 shells in my tighter choke (modified) on my Merkel 47E. I loaded #6 shells for the first barrel (Improved Cylinder). My thinking was even if we flushed quail, being late in the season, they would flush wild from afar, requiring a little more punch to bring them down. No breeze and a bright sun made the morning a rather warm 45 degrees at the start. We hiked for about 45 minutes before we came to a short saddle. Ed went atop as Kaiser and I were at the bottom. I lost sight of Ed before some boulders and within a few minutes I heard 3 shots from Ed's 20 gauge model 12. Kaiser and I raced up there to find Ed. He let us know he flushed a covey of 8 valley quail. Unfortunately he was unable to connect with any. 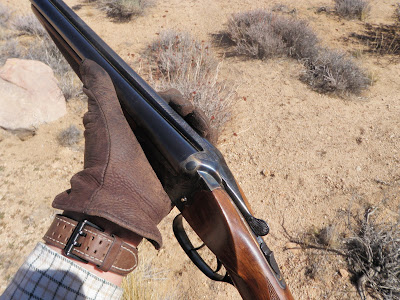 As we continued on, we moved up a draw where in a distance I saw a hunter making his way toward us from the other mountain. Dressed in all Blaze Orange, he was hard to miss. He was not alone. I noticed that he was running a dog, a Brittany and was accompanied by a partner. Knowing he was making his way to us I stopped and started waving to make sure he acknowledge me before I started moving s that if by chance a bird rose in my direction he would know (assuming he had half a brain) not to shot in our direction. To the right of us was another draw with a hunter in blaze as well so I made sure he saw us too.

Eventually the two hunters made their to us. After exchanging pleasantries they told us they flushed a covey of about 40 mountain quail on that mountain. He had heard several shots earlier in the morning in that direction. They managed to bag one. They mad their way down the way we cam up and we too off where they said the covey last was seen. 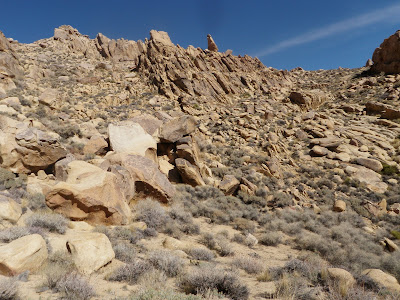 Ed the consummate mule made his way up that mountain with ease. For my out of shape self, I had a more difficult time. Eventually we lost each other for a time. I made it up 75% of the mountain and walked through a saddle trying to reach Ed but at one point the path was uncrossable. So I double backed and tried to make it up again. At this point I was too exhausted and decided to head down toward flat ground. We met up again after about an hour or so. We took a siesta for lunch and let Kaiser rest his tired feet although he didn't want any of that. 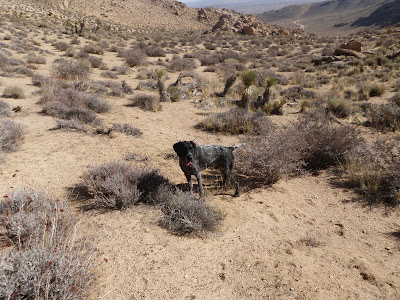 Heading back, we sweeped the area to our left that we did not cover when making or way into the canyon. In about 45 minutes a covey of about 40 valley quail rose about 40 yards ahead. He chased them only to find a few singles here and there. The first one I had no shot nor did Ed. The second I rushed my shot. I did not even have a proper cheek weld on stock when I fired. Even if I did I lead hem way to much. Eventually a pair flush at my feet while making out way down a few rocks. The first bird to flush I had no good shot so I refrained from pulling the trigger. But the second flushed to my left and I shot, missing with the first barrel (although Ed said I hit him with the first as well) but I know I connected with the second shot as I saw feather and it tumbled in the air. While trying to go after the bird climbing don and back up rocks I lost the exact location of the fall. I nor Kaiser were able to find the bird. I'm not sure if he ran or was just lying somewhere and just could not find him. I really hate losing birds.

I was trying out my new Contour camera and was able to capture this moment. One thing I failed to do was reset the angle the lens from my last time I used it. So the picture is slightly slanted. One thing I notice is that since its a wide angle lens shot from afar are hard to see, I have video of the 40 birds flushing but you can not even see them. Another mistake was I placed the camera too far back on my head and you couldn't exactly see what I saw. Live and Learn. I took very few pictures today as I was filming instead. I should have taken more as the video did not come out as I wanted.


This video shows a few minutes after the 40 quail flushed. We ran into a pair, I was too slow to make a shot at the first bird but did manage to take two shots at the second. As I mentioned I made the shot but was unable to retreive it.

The rest of the day was uneventful and we eventually made it to the truck to head home empty handed. That hasn't happened to me in a long time while quail hunting.
Posted by gourmetsportsman at 7:39 PM