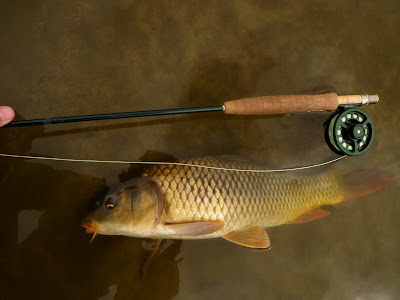 Last night I went to Richard's house to borrow his custom built 7'9" 2 weight Winston LT 5 piece rod. This morning I arrived at the water at about 9am. A little later than I really wanted to but that is life. Again this morning started out gloomy with only a slight breeze.

I fished for about 20 minutes before my first hook up. I felt the fish and it ran, I did not really set the hook as I thought it would do that itself while it bulldogged me and ran. I did not want to break off. In a matter of a few seconds the line went limp and the fly came unglued. 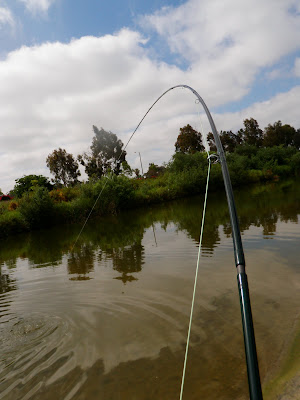 It took some time after that to get another hook up. By this time the breeze vanished and the sun began poking itself out of the clouds. Making it a perfect day for carp. After blowing a few attempts I finally some tailing to my left and I casted toward it. I was not quite sure what direction the fish was facing but made an educated guess. After a few short slow strips I felt the tug and then then the explosion as the fish ran. The 2 weight bent down to the cork. I fought him mostly using the drag of the Galvan OB1.

After a few good runs, the carp gave in and allowed me to land him. I used to boga him, and he weighed 3 pounds. One if the smallest ones I've caught here but a great fighter nonetheless especially with the small rod. I released him and moved on to other waters.

After making through a mess of a cattail jungle I spotted another feeding. Casting to him, I stripped slowly and he took but again I didn't set the hook well and eventually came off. 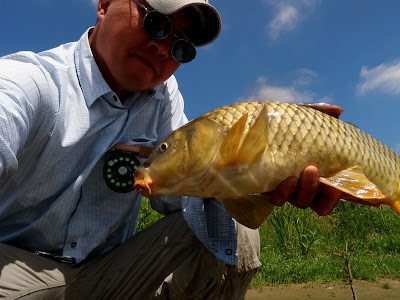 As he was not on for long, he did not spook the other fish feeding near him. So I chose anther fish to cast to and finally got one to bite. This guy did not fight much, he basically allowed me to muscle him around, not easy to do with a 2 weight. After a few short runs it came to me. The moment I put my hands on it, the fly came out and due to the girth of him I didn't get a good handle and he ran off. So I was unable to boga him. He looked about a 4.5 to 5 pounder.

Moving on to another group of feeders and managed to get another to take. This guy was a fighter and a runner. He bulldogged me up close and ran whenever it had a chance. He took me to the backing at one point. Once landed I weighed him at 4.5 pounds. 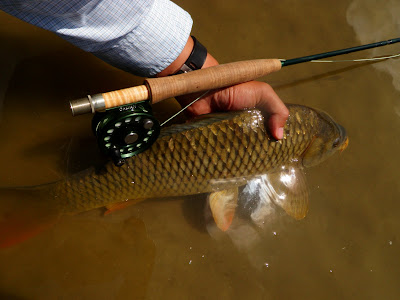 I left around 11. It was a great day to be out as the conditions were perfect. Perfect enough to comfortably cast a 2 weight.

I have now caught a carp on every rod weight from 1 though 7. I could actually go out there with an 8 weight but I think that is way overkill for this water.
Posted by gourmetsportsman at 12:21 PM