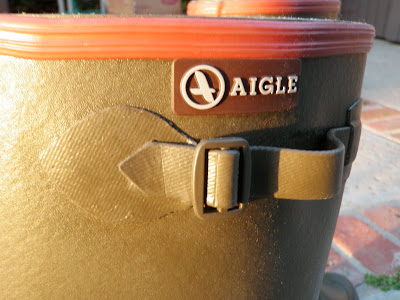 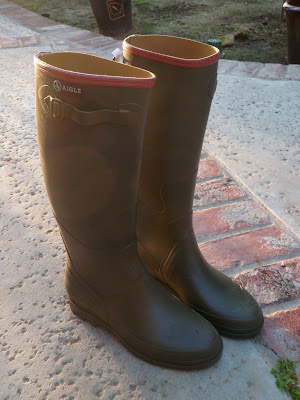 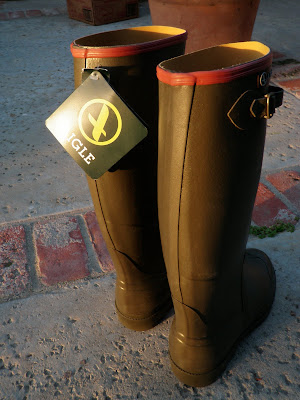 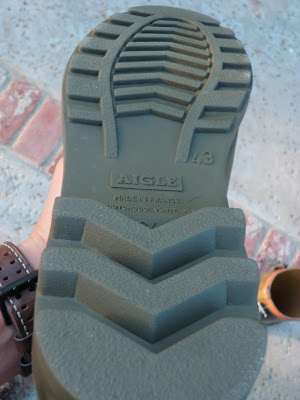 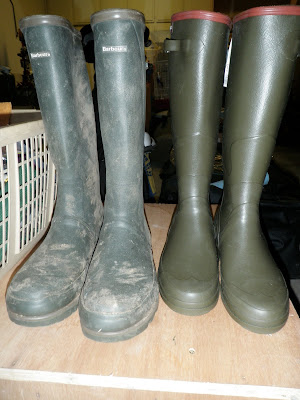 I found a pair of Aigle Benylsport boots on sale. Believe it or not I found them on the JCrew website. This pair was $79.99 and it came out to just over $100 with tax and shipping. Its about a $30-$40 savings from other sites. These pairs fit a bit tighter than my Barbour Wellies. The rubber though is much more supple yet they hold the straight up shape of the upper portions of the boot much better than my Barbours did when they were new.

My Barbours were purchased years ago and they were found on the internet on sale as well. When I received them I was more than disapointed that they were made in China and not the UK. Since they were on sale I could not return them. I'm glad that Aigle has not moved production to China and have kept their factory in France.

The Benylsports have an adjustable tightening strap on the upper although I think its not really useful or practical. I find them very difficult to adjust, I'm not sure if it's because they are new or if its not well designed or if its just me. I'll play with it some more to find out. One useful feature though, if it works, is the self cleaning soles. I'll see when it gets wet if this is really the case.

According to my Akah catalog Aigle is the number one boot for hunters in Germany. They source a German hunting magazine, Jager, that polled subscribers. Wellies years ago were almost impossible to find, trust me I looked for years back in the late nineties and early two thousands. Now they have become fashionable and companies like Nordstroms, JCrew, Nieman Marcus are now carrying wellies (although I've never seem them in the stores they are available through their websites). Even lowbrow hunting outfitters are carrying them too. I'd never thought that would ever happen.
Posted by gourmetsportsman at 10:08 PM