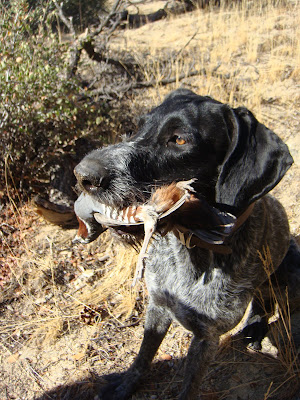 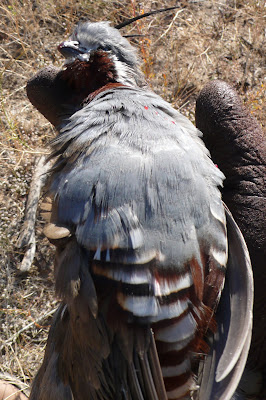 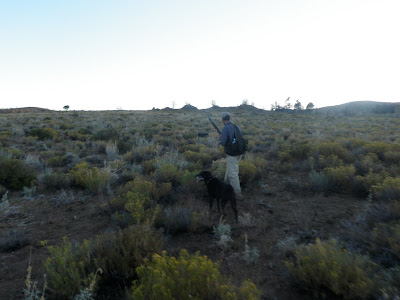 After bypassing the first dove season and missing the first week two weeks of the early season mountain quail season, the dog was ready for some action. I called up an old friend Jack let him know I was heading out for the early season and his lab Madeleine were game to go out in search of grouse and quail. They were. Jack arrived at my house Sunday morning and we went off. I had never hunting grouse and decided to explore some areas that I researched last year that I thought would hold such birds. I have fly fished this area in years past and thought that the region would be as good as any for a chance at grouse. I decided it would be a good chance to start off with my new Darne.

We had a late start and did not get to the hunting fields until about 10:30. Although we were in elevation the heat was definitely rising. This had a serious effect on my dog since I did little in the way of conditioning this summer. Because of my laziness, the dog needed several rest breaks. We found no grouse and headed back to the car walking along a creek. There we flushed several Mallard Hens. Kaiser even flash pointed a few. Unfortunately he was not rewarded with a bird since we were carrying lead and not to mention we are weeks away from the general season. All totaled there were at least 8 Mallards along the creek. We ended the search for grouse and headed toward my mountain quail spots to eat lunch and sit out the midday heat.

After a few hour siesta and listening to out of season valley quail calling throughout the area we were resting, we made our way toward snubnose gate. Kaiser now rested hunted hard and became very birdy once we made it over the hill. Jack and I noticed signs throughout. A group flushed wild when Kaiser was on their scent. I took one shot with a B&P Speader No.7 in my Merkel M8. The bird went down hard. Madeleine went for the retrieve and handed it to Jack. I told him "Jack, I told you I'll get us on birds." Now filled with adrenaline we were ready to hunt. Within minutes Kaiser was on point near rather heavy cover. I could not maneuver to get in shooting range so Jack sent the lab into flush. The quail exploded out and I shot twice and missed, the second shot actually hit a fallen tree as the bird raced behind.

We moved on and while hiking down the mountain I saw a single race in front of me, so I called out for my dog to come and hunt near me and yelled out to Jack "Quail on the ground!" Jack also some running near him as well. One flushed wild and I took a shot again with a spreader load taking him down. Kaiser made the retrieve. The covey then flushed up the other mountain, at least 25. I took a longer shot across the draw with my second barrel loaded with a B&P F2 Classic No. 7 and missed. I heard Jack take a shot with is 16 gauge Winchester Model 12. I asked him over the radio if he got him and he replied yes. We were now both on the board. Several tight holding quail remained flushing one at a time. All of those were not in gun range so they flew away without incident. By this time I was beat, having not prepared myself for the season. I told Jack if he wanted to chase the covey upwards he can do it but I'm staying here to rest. He went up the hill with his lab and 15 minutes later I heard a shot. I called him on the radio and he took another.

We started to head back to the car as the sun was falling quickly. As I was beat, I told Jack he could have all the birds the dogs will find from now on, I was done. I broke open and unloaded my gun and slung it German drilling style under my armpit. We got up toward the meadow area and Madelene realizing the hunt was basically over walked at heel with Jack while Kaiser kept patterning in the hope of finding more birds. Jack and I both taught it was a waste of energy. But since we weren't hunting the next day I let him roam. After Jack mentioned that there are probably not going to find birds since the scenting conditions were poor Kaiser flash pointed not far from the car and a covey rose. They were valleys at least 20. Always trust your birddog. We let the dogs have some fun and hunt them up so shot them with our cameras rather than our guns. Kaiser pointed several and Madeleine flushed several as well. Unfortunately all the photos I took did not come out as it was low light and my new camera sucks. They all came out blurry.

After some fun for the dogs we called it a day and headed home.
Posted by gourmetsportsman at 9:29 AM No comments: