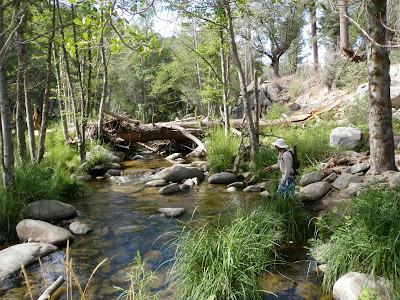 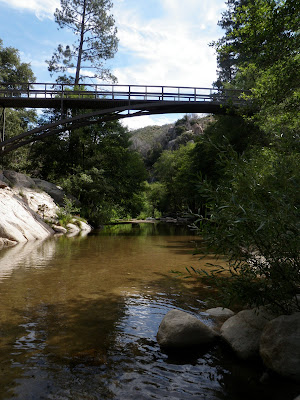 The last time I was here this bridge was completely destroyed


Although Ed cancelled on our Friday outing to Deep Creek, we managed to reschedule for today. Its been several years now, at least 5 since my last outing to this piece of water. The last time I came here it was after a major fire and a heavy rain season. By then the river has blown out and running chocolate milk. Gone were the fish. Basically it was a waste of time and gas. This time it was different. The water was less than I remembered it from years back but the fish were back. 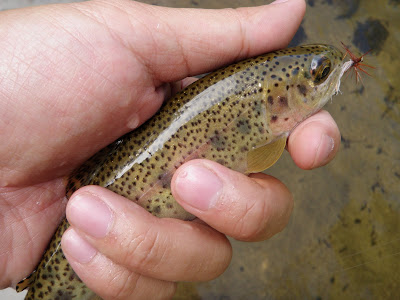 We arrived around 9am and made our way down the Pacific Crest Trail. At the first hole we saw we began fishing. Unable to coax a rise with my dry I moved onto the next hole just before the bridge. A fish managed to attack my fly I hooked up and landed him. Expecting to see a brown, I was surprised that it was a small rainbow. He was beautifully colored, olive slightly gold with blue Parr marks. After releasing him I managed another but he came unbuttoned. On the next cast a larger trout took and head shook until the leader broke at the knot. The leader was new and I wondered why the leader gave way. On the my last outing to San Antonio Creek I had the same problem but that was because I was fishing way too old of leaders. I was pretty certain that this would not be a concern this time around. I was wrong.
I moved on to find a pool with at least 20 fish; all of which I spooked. We were fishing downriver which I do not like but we had no option. It is much easier to come up on a fish upstream than down. Within the group I saw one at least 14 inches. I went up stream to go get Ed. When he arrived I told him to try this pool as things must have settled by now. We came through the backside as to not spook the fish. He threw a few casts without success and for some reason he had to stop fishing. So I threw one cast in there and landed a dink on the second drift. Ready now I gave Ed the hole and left him there. Later he told me that he managed a few in there all in the submerged rock I told him they fled to. 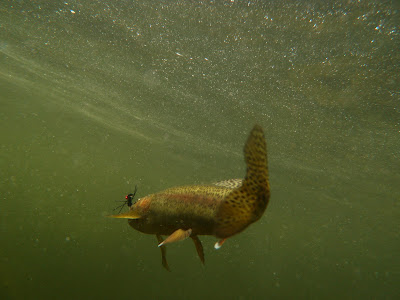 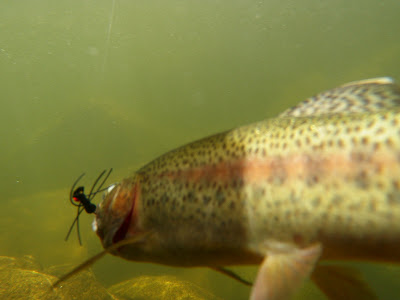 After a few fish I was not catching as many as I'm used to when fishing SoCal wild trout water so I decided to make a change. For laughs I tied on a size 12 (or maybe 10) Chernobyl Ant. Within a few casts, I had one rise and take. I landed him and took some underwater pics. I casted again and an even bigger fish took. It bent the rod to the handle of my Nac Microfy49 only to break off at the knot. After some cursing, I retried another Ant and the knot kept slipping. These were new leaders I purchased only a few days before. I was not happy. Finally able to get the knot to hold, I went on fishing.


We continued to move noticing some good sized fish many in the 16 inch range maybe more. Ed managed to hook a few of these but was not able to get them to hand. For one reason or another they seemed to all come unglued. He did out fish me this outing. I did not have much success as I usually do in these types of water. Although they were taking the dry they were not as aggressive like that of the fish of Bear Creek or even the San Gabriel. In any case I did do as well as I thought I would have.

I reached a certain point and saw a bunch of college aged kids in bikinis and board shorts on some boulders ahead. They were cliff jumping from heights that would have required me to change my shorts. These kids were insane. Some were even doing back flips.

Ed and I decided to call it a day. We were done and ready to get out of there. One thing I noticed at Deep Creek is that the stream is very hazardous. The rocks are extremely slippery. I fell more times than I could remember. At first I thought that my Aquastealths with studs were the culprit until I saw Ed take a header into the water. He he was wearing felt soles. He said he fell more than I. He mentioned that if he added all the number of times he fell, he had never fell this many times as he did today. I said that was true with me as well.

Another observation was that all fish caught today, to our surprise, were Rainbows. Bows have always been in the past (at least for us) rather rare and most if not all fish we caught in the San Bernandino Mountains have been Browns.

The fish are tougher to catch than other streams but still you will be able get more than enough. They simply are not as aggressive but they are larger. I have heard that a 7 lber was once caught in these waters. I have seen pics of 22 inchers. So big ones do live in these waters. I believe they must be in another section we fished. The area we fished need not a 4wd vehicle. There are other access points but do require some off roading. I believe it is in these sections that the really monsters live. The area we fished, there simply is not enough water to hold such fish. 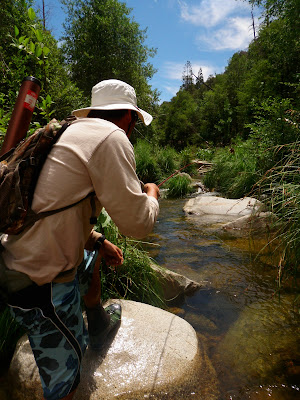 Ed throws a wet fly through a seam 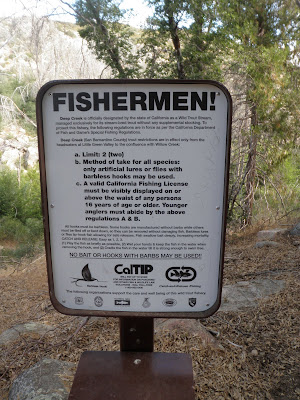 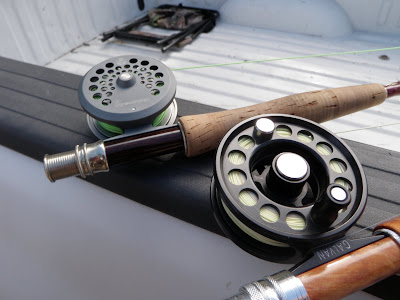 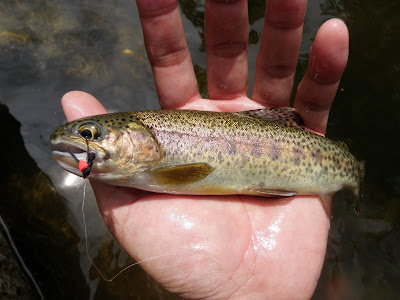 Chernobyl Ant gets its first fish 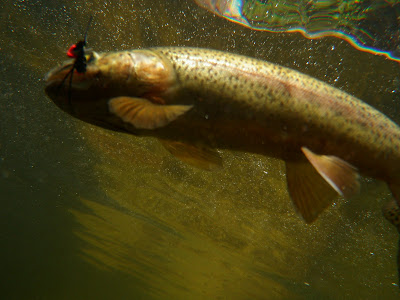 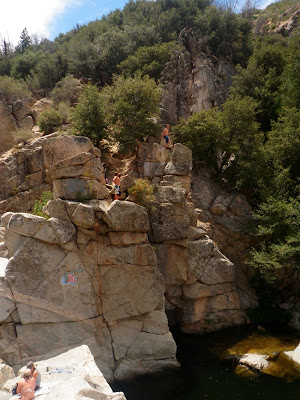 Crazy kids on the cliff. 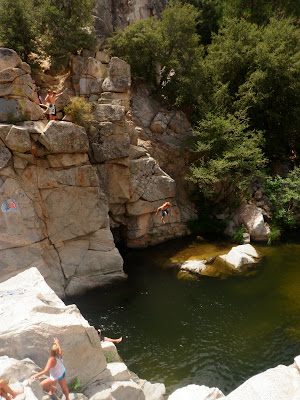 Posted by gourmetsportsman at 6:11 PM