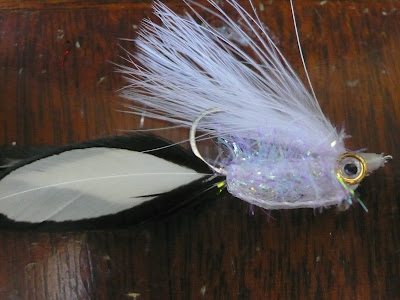 This my Rattle Shad Fly that was created for fishing California Bass lakes. I have created three versions of this fly. Below is my favorite. This was the first fly that started catching me fish at my first outing at Barrett Lake. After several fish I eventually lost it and since I had only one in my box I switched to the other versions. I now have several in my box for my outing at Barrett this weekend. 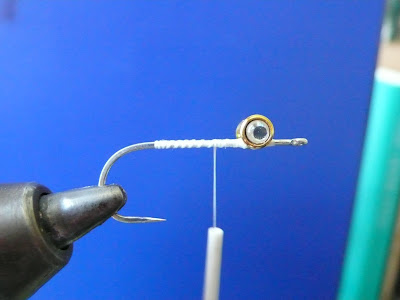 If you plan to fish this at Barrett Lake or any water that requires Barbless hooks, you will need to grind the barb down. I used a Dremel tool for this. Pinching the barb on this hook will not work. The barb only breaks off and leaves a burr. It will not pass the cotton ball test. So be on the safe side and grind the barb off.

Tie the eyes on first. I usually will use Black Real Eyes but gold will work as well. Leave plenty of room for a head. The tubing body will need some room to be tied on. 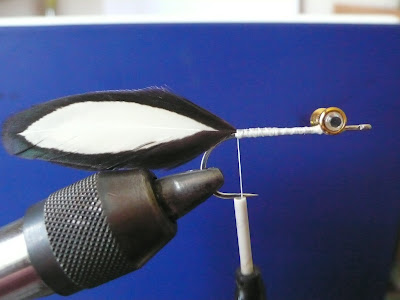 Next tie on 4 hen saddle feathers of equal size. Two on each side. 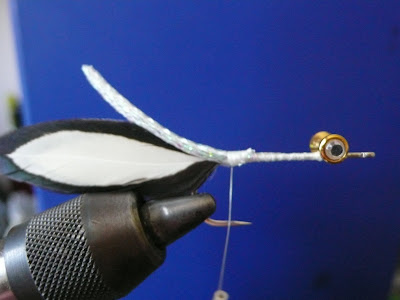 Next tie on the tubing. Make sure the tubing will be long enough, it will shrink a little with the the rattle placed inside. 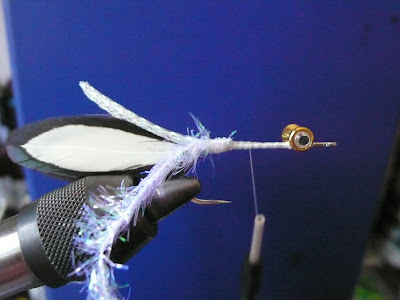 Next tie on the estaz and wrap forward. 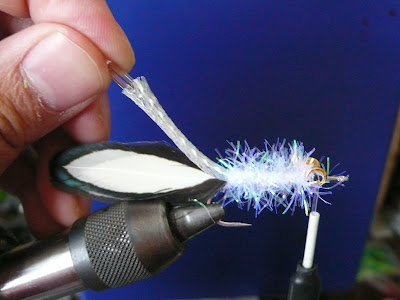 Place the rattle inside the tubing and fold it forward. When placing the rattle make sure the you place the rounded end in first. SR rattles come with one end pointed the other rounded. The pointed end will fit perfectly in between the dumbbell eyes when folded forward. 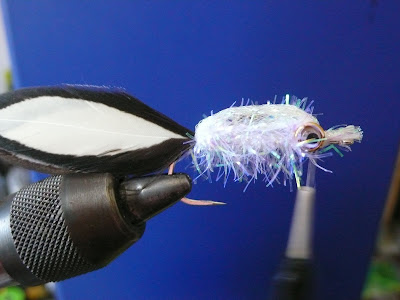 Secure the tubing with several wraps. Cut off any excess. 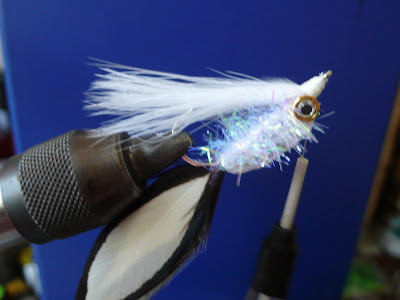 Flip the fly over and tie The Marabou wing. Whip finish and cement with Loon Hard Head or best to epoxy it but I'm too lazy for that. It will need a strong bond or it will unravel. 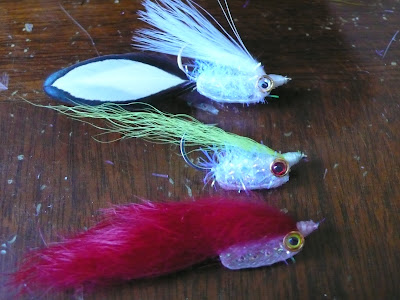 Here are the 3 versions. All catch fish. The other two are self explanatory I think you can figure them out without instructions. One is Bucktail the other is bunny.

Although I have not fished for Stripers in many many years I am confident that this would also do well in our Striper lakes. I have tried these in the bay without much success but I still believe that this would do well there. To be honest I gave up too early on this fly and did not give it an honest try. I will next time I hit the bays.

Posted by gourmetsportsman at 12:46 PM